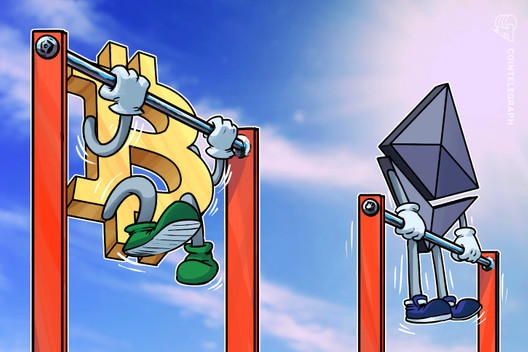 Research by on-chain analytics platform Santiment has revealed that the market capitalization for all ERC-20 based tokens has flipped that of Ethereum itself. It added that it is currently the all-time highest market cap differential of ERC-20 coins over Ethereum.

The total market cap for all current ERC-20 assets is $46.7 billion whereas that for Ethereum is currently just over $41 billion at the time of writing.

There have been a couple of similar, brief ‘flippenings’ this year with the longest sustained one occurring in July. Ethereum’s price surge in August increased the market cap to more than $50 billion but the subsequent correction has allowed that of ERC-20 tokens to surpass it once again.

The ERC-20 market cap has ‘#flippened‘ the $ETH market cap since the Black Thursday #crypto dump. After first crossing in mid-March, it occurred again on Sep 3rd. This is currently the highest market cap differential of ERC-20 coins over $ETH of all time! /9tAtfPe06d pic.twitter.com/vTH7mD6JWm

Tether accounts for a large share of the ERC-20 capitalization with around $8.9 billion, or 60% of the entire USDT supply, currently on the Ethereum network according to the Tether Transparency Report.

The surge in popularity of DeFi yield farming over the past couple of months has resulted in a slew of new ERC-20 tokens entering the markets, contributing to this overall capitalization increase.

DeFi and USDT has driven economic activity on Ethereum to such an extent that the seven day average adjusted transfer value is now higher than Bitcoin’s for the first time since early 2018.

Analytics by CoinMetrics reported that on September 5th, this figure reached $3.08 billion transferred on Ethereum compared to $3.01 billion using Bitcoin.

The launch of passive earning opportunities for Ethereum holders, such as Yearn Finance’s yETH vault, has also added to the economic activity on the network. There is currently 220,000 ETH, worth around $80 million at current prices, locked into the yETH vault, earning roughly 28% according to Yearn stats. SushiSwap has been another one of the more popular DeFi protocols recently, driving both Ethereum transfer value and its network fees higher.