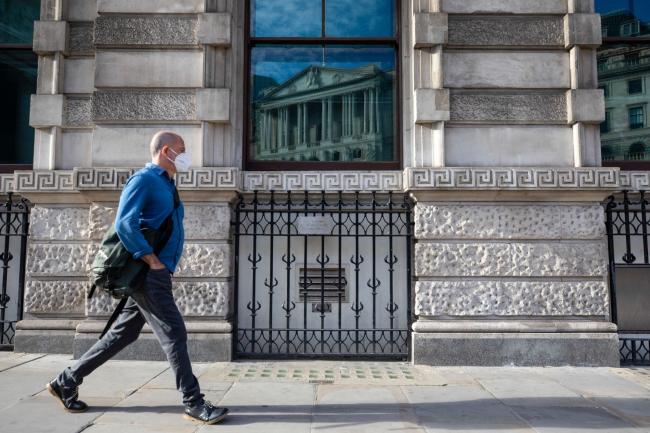 © Bloomberg. A pedestrian wearing a protective face mask passes a window reflecting the Bank of England (BOE) in the City of London, U.K., on Tuesday, Aug. 4, 2020. Bank of England officials could signal on Thursday that the case for more monetary stimulus is growing as a nascent rebound from the pandemic-induced recession risks fading.

(Bloomberg) — Investors are now paying for the privilege to lend cash to the U.K. government for short periods of time, adding to conviction for rate cuts by the Bank of England.

The Debt Management Office sold six-month bills with an average yield of minus 0.0005% in an auction on Friday. It’s the first time investors have agreed to buy the short-term debt with negative rates.

The subzero yield is yet another sign that investors see the BOE easing policy further, given the possibility that trade talks between the U.K. and European Union may fail. The rate on two-year government debt this week fell further into negative territory to an all-time low, and money markets on Friday priced in a cut below zero as soon as February, with a reduction of almost 20 basis points by the end of next year.

Unless a deal is struck, companies will be subject to EU tariffs, quotas and customs checks.

A messy transition adds to a plethora of risks looming over the U.K.’s economy. These include the government’s plan to end its furlough program, which may spur a jump in unemployment figures, and the rising number of coronavirus cases in the country. They dampen optimism over the 6.6% monthly growth in gross domestic product in July.

“There’s still room for the markets to price the outcome of BOE having to cut to zero if Covid-19 worsens and no-deal seems more likely by the November meeting. The negative rate debate may intensify next year.”

BOE Governor Andrew Bailey said last month the central bank has plenty of room to add more monetary stimulus to fight the U.K.’s economic slump. Three-month sterling Libor — the rate banks can borrow from each other — fell to a record on Wednesday and is below the BOE’s benchmark, a move that often precedes a rate cut.

This may further reduce the U.K.’s six-month funding costs, which fell to an all-time low of 0.09088% on Thursday.