Bakkt saw a surge in cash-settled bitcoin futures 36% higher than the previous all-time high. This is especially weird considering bitcoin’s uncertain nature. However, there is an interesting take to all of this.

Another record day in the books for our physically delivered futures:

15,955 Bakkt Bitcoin Futures were traded today, representing over $200M of volume and a 36% increase from our previous all-time high 📈

With bitcoin heads closer to $11,000 after its dip on September 2, not all bulls are confident. Given, the current price level and the recent surge, it is better to stay out of the market than in it. That’s because the inflation and low-interest rates have caused the yield bonds to, well, not yield good returns. Investors would rather have cash in hand than invest in government bonds. In fact, stock/equity markets seem to be the best bet given the Fed’s intervention.

Why is Bakkt’s volume increasing? 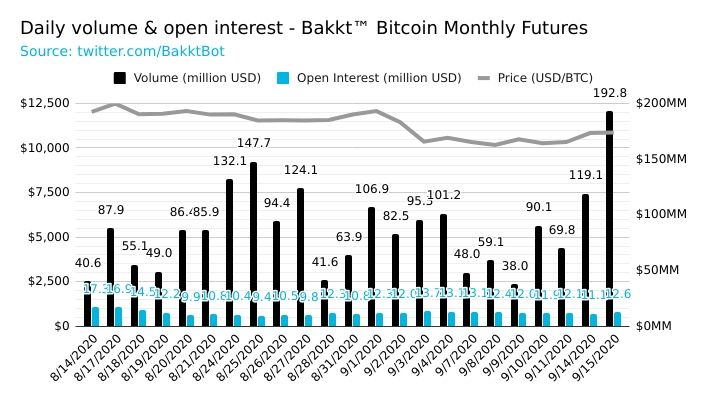 It should be noted that the price difference on near-dated bitcoin futures against spot can be used to capture the premium. With September futures expiration coming to an end, a lot of users might be looking to capture this premium, which could explain both, bitcoin’s price surge and Bakkt’s new ATH.

This is quite similar to what happened in 2019 – much of the year, near-dated futures were at a premium, hence, Gensis Capital saw a lot of cash-based originations occurring in the year. Specifically, from 31.2% to 37.2% from Q3 to Q4.

Bitcoin markets are inefficient in comparison to the stock market or other commodity markets. The deficiency of cash will also cause the aforementioned premium to rise causing a contango/forwardation.

“In less efficient markets like bitcoin, the steeper curves might be present for longer as there isn’t enough available cash for trading firms to take advantage of this arbitrage. It becomes somewhat of an arms race during periods of steep contango and borrow rates on cash spike.”

Since it is noteworthy and since the bitcoin market is overleveraged at times, this could also be the reason for the premium.