Why Trump Banning TikTok May Be a Blessing for Bitcoin Price, Adoption 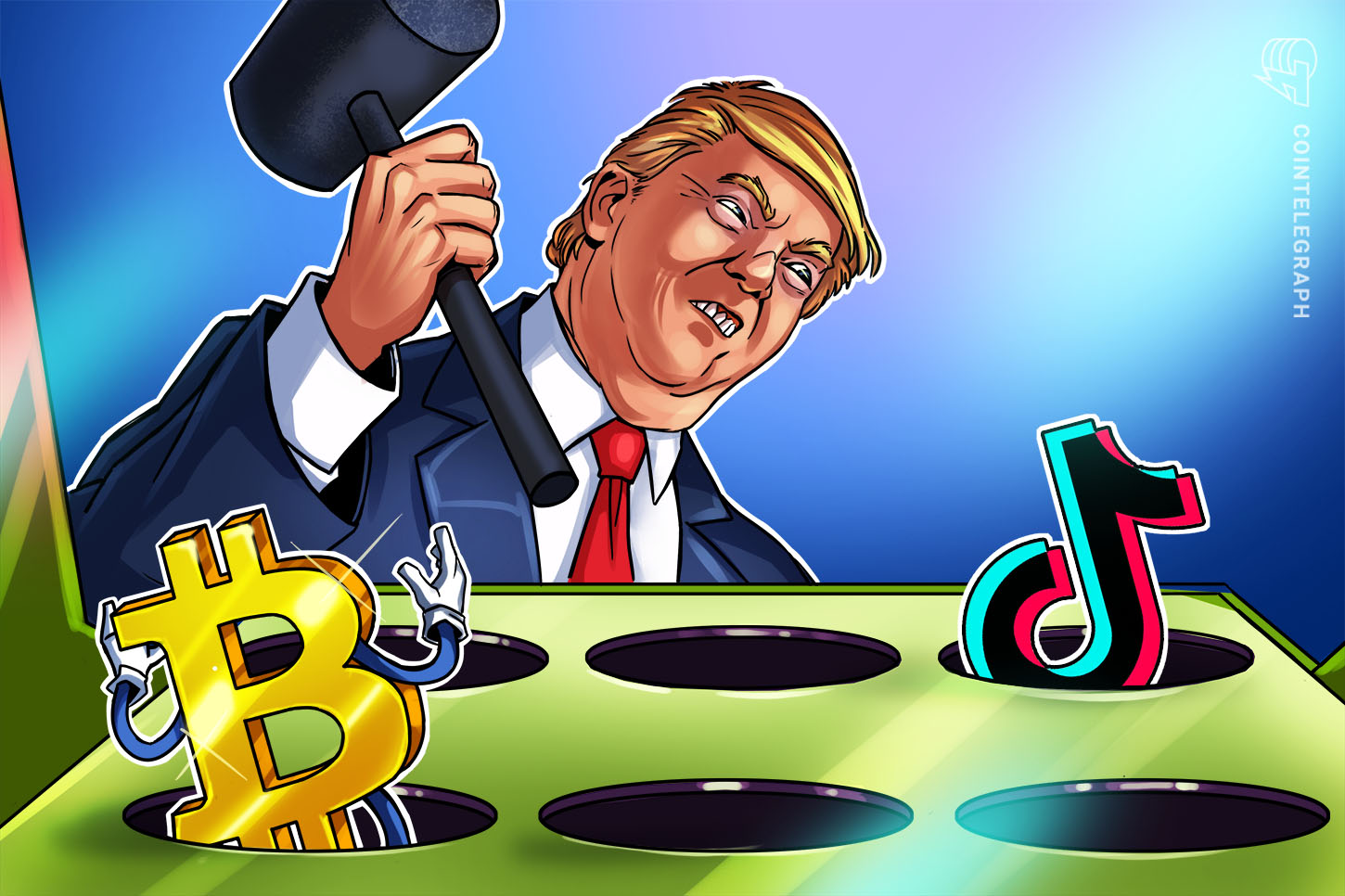 Yesterday saw many major altcoins rally to their yearly highs, with Ether (ETH) surging past $400, which I expected was a likely scenario in my last article two weeks ago.

In addition, XRP also had a bumper day exceeding $0.32 while momentarily outperforming Bitcoin as expected in my July 1 article.

However, Bitcoin showed its dominance in the space by wiping out several billion of these gains in a little over an hour. So what does the week ahead look like, and just what sort of impact could Trump’s TikTok ban have on the cryptocurrency space?

Let’s get some perspective

Bitcoin on the weekly shows a picture of the future. The leading cryptocurrency by market capitalization has already tested the 0.5 Fibonacci retracement level of $12K before being rejected.

If you haven’t been paying attention to the weekly fib, then you should probably google how to use the Fibonacci tool on Tradingview right now because it’s probably the closest you’ll ever get to having Marty McFly’s sports almanac in Back to the Future 2 than you’ll ever get.

The next level to claim is 0.618, which sits at $13,500, and if you’re happy with 20% gains on Bitcoin, that’s great. But when you look at other top-tier alts, you will see that most are trading under the 0.236 fib, which means greater upside potential, and this is something we experienced this weekend.

Ether (ETH) exploded by 80% from the bottom of an ascending channel and already made a run at the 0.236 fib. Keep in the back of your mind that Bitcoin is currently on the 0.5 fib, or two levels higher than the 0.236, and ETH hasn’t even claimed that level yet.

Just wait until this level is broken and Ether makes a run-up to 0.382, that’s an ETH price of $660, and this is likely only the beginning.

The potential downside now sits around the top of the channel it broke out from, which is around $300-$330, and below here I would be looking at the center part of the channel of around $280.

Despite the fact levels have already been hit in a flash crash earlier this morning, I wouldn’t be at all surprised if they were reached again before the next leg up to $660.

If you liked the ETH chart, you’ll probably understand why XRP rallied hard too.  XRP briefly broke out of the same ascending channel that Ether was in, only XRP still has a long way to go to the 0.236 fib.

As a matter of fact, it has a monstrous 188% move to achieve in order to reach the $0.85c fib target.  So if you missed Bitcoin, and you missed Ether, there’s still a very good chance that the number three digital asset by market capitalization could provide insane gains from its current level.

The downside potential for XRP using the same channel levels as Ether sits at 24 cents for the middle channel and 19 cents for the lower target. Once again, the first level has already been tested in the flash crash, so whether we will see these levels again in the short term is unlikely considering the current fib targets.

But if you’re worried about FOMOing in at the top, there is another leading crypto that is yet to awake from its bear hibernation.

EOS is yet to run

EOS hasn’t been getting much attention lately, and technically speaking, it’s looking like the next large-cap coin to make a big run-up to 0.236, which in the case of EOS is $6.50 and with the price just under $3, this could give you some impressive gains in the short term.

Since EOS is yet to break out of its channel, it is only logical as other top tier alts start to rally in the shadow of Bitcoin, that traders and investors will start looking at charts trading at the bottom, just like I noticed with ETH and XRP, EOS is currently still trading in the lower part of its channel, not quite the bottom — the bottom is planted at $2.50 — but the risk vs. reward for EOS certainly looks appealing.

There are also other good reasons to be looking at EOS right now. Not only is Brock Pierce currently running for POTUS, which can only be a good thing for EOS, but parent company Block.one are targeting Gen Z users flocking from TikTok with their Voice Social Media platform. In a tweet on July 30, Pierce said:

“Gen Z is mobilizing to stand up for their rights and privacy! Individuals can make a difference. EVERY VOICE HEARD”

The early Bitcoin investor is known for betting on the right thing and the right time, and with President Trump hinting towards a ban on TikTok as early as tomorrow, there’s a hole in the U.S. market where 80 million users may be looking for alternatives.

While this may put EOS in a good position for extra exposure, there are already other blockchain-based social media platforms that are focused on bringing new users to the crypto space.

Once such company has recently undergone a rebrand ahead of its launch this month, called Hyprr, which is U.S.-based and partnered with banking giant Wells Fargo for purportedly easy on and off-ramps into crypto, which puts it in prime position to take over TikToks U.S.-based market share.

I contacted Hyprr CEO David Brieley about his position in the wake of the potential TikTok ban, where he told me that Gen Z consumes 5 billion hours of content per day via social media, which is twice that of millennials.

If you consider that Steemit once occupied a $1.8 billion market cap largely based on speculation and millennial appeal, you can only imagine the positive impact a successful blockchain-based social media platform could have on the market if it took off like TikTok, and what better way than to do in the wake of such a massive controversial ban of one of fastest-growing viral platforms.

The bearish scenario for Bitcoin

If Bitcoin fails to hold the previous multi-year resistance of $10,500 as fresh support, I would expect the downside to be limited to the 0.382 fib of around $9,500. However it seems that the bulls are going to be in control for a little while.

The bullish scenario for Bitcoin

If Bitcoin can push past and hold above $12K, then the next logical area of resistance is $13,500, which represents the 0.618 fib. However, with alts rallying, and the cyclical effect of low-cap alts flowing into top-tier alts, and then back into Bitcoin before starting all over again, I would expect the price of Bitcoin to remain quite flat over the next week.

The views and opinions expressed here are solely those of @officiallykeith and do not necessarily reflect the views of Cointelegraph. Every investment and trading move involves risk. You should conduct your own research when making a decision.